By the end of this tutorial, you will be able to:

This tutorial is the fourth part of a series on identifying instrumental and systematic sources of noise in Kepler and K2 data. The first three tutorials in this series are suggested (but not necessary) reading for working through this one. Assumed knowledge for this tutorial is a working familiarity with Kepler light curve files, target pixel files, and their associated metadata.

The Kepler space telescope operated as a photometer: using charge-coupled devices (CCDs), Kepler collected photons and processed these as flux measurements. The detector array consisted of 25 modules, and 94.6 million pixels. With an instrument of this size, electronic noise issues are inevitable. In this tutorial, we’ll look at three major sources of electronic noise that occurred throughout both the Kepler and K2 missions.

Crosstalk refers to the phenomenon where an electronic signal from one channel of a device is transferred to another channel and causes noise. In Kepler and K2 data, this often manifests as signal from one (usually bright) target appearing elsewhere on the detector. This is known as “video crosstalk,” and only has a significant effect when it occurs on the same module, due to the shielding between modules (Kepler Instrument Handbook Section 6.3). Kepler crosstalk can also occur between the CCD modules and the Fine Guidance Sensors (FGS), and between either of these and the onboard clock. However, these kinds of crosstalk are well understood and corrected by the pipeline before data delivery. If you are interested in reading more about these types of crosstalk, they’re covered in Sections 6.2 and 6.4 of the Kepler Instrument Handbook.

To understand what video crosstalk looks like, let’s take an example from the K2 mission, as documented here. UGC 7394 (EPIC 200084891) is a galaxy that was observed during K2 Campaign 10. Campaign 10 was delivered in two parts, as observation began with a pointing error of 3.5 pixels (K2 Data Release Notes 15, Section 2.1), so when we download our data using Lightkurve we have to specify which file we want. Let’s begin with Campaign 10a:

UGC 7394 is very clear in this image, but there’s also a column of what looks like saturation bleed down the middle. In fact, this is video crosstalk from a nearby bright star. The separation between these two sources becomes even more clear when we check Campaign 10b, which used a slightly different pointing:

You can also check for yourself that the crosstalk source is unrelated to the galaxy by using Lightkurve’s interact() function offline and noting that the spreads of the two sources on the detector differ independently.

The Kepler detector electronics have a high-frequency noise feature due to circuit self-resonance in the GHz range, which is aliased to lower frequencies by the pixel sampling rate for detector readout. These aliases lead to changing temperatures and pixel sensitivities on the focal plane, which appear as horizontal stripes in motion across on the detector. For a more technical exploration of this phenomenon, see Section 6.7 of the Kepler Instrument Handbook.

Let’s have a look at an example of rolling bands in K2 data (as documented here). This star, EPIC 211741417, has a rolling band passing across its aperture, beginning around 3306 BKJD (Barycentric Kepler Julian Date) days. First we’ll download some data, and see if the rolling bands are visible in a cadence taken from before the rolling band passes (left), and after it passes (right). We’ll also make sure the images have the same color scale, so we can make a fair comparison.

There’s nothing obvious here; the background is a little darker during the rolling band event, but not noticeably so on this scale. To get a better look at this, you can use Lightkurve’s interact() function in an offline notebook. However, it’s also possible to observe the rolling band by looking at some light curves.

We’ll extract two single-pixel light curves for two pixels in this target pixel file (TPF): the brightest pixel where the target lies, and the bottom left pixel as representative of the background flux. First, we’ll make an aperture mask for each; you can read more about this process in the custom aperture photometry tutorial.

Now let’s look at the bright pixel and highlight the region where we expect to see the effects of the rolling band: 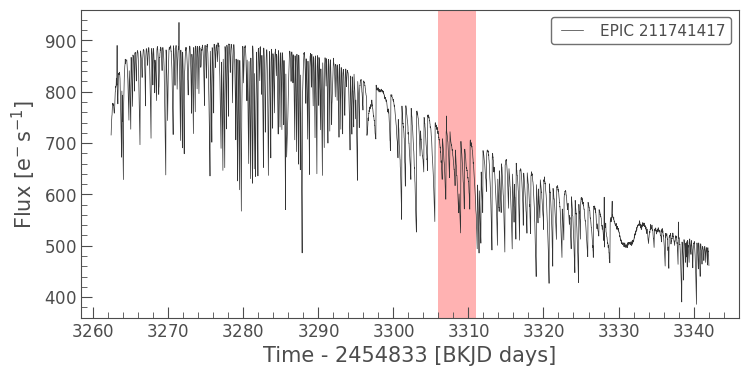 This light curve shows the K2 six-hour pointing drift, and an overall trend due to temperature changes on the detector. There is no noticeable change during the rolling band crossing. This tells us that this star is bright enough that the effect of the rolling band is negligible in comparison.

Sure enough, we can see a dip in background flux as the rolling band passes over the TPF. Note the scale of this dip; this low amplitude confirms what we saw above, that rolling bands are negligible in amplitude compared to target flux, six-hour drift, and temperature-induced flux variations. Nevertheless, it’s important to be aware of rolling bands in your data when searching for noise sources and working on background modeling.

Rolling bands are identified by quality flags 18 and 19 in light curve and TPF metadata (MAST Kepler Archive Manual, Table 2-3), but the automated flags are incomplete and do not detect all rolling bands. For further reading, there is a Lightkurve tutorial on checking for rolling bands in Kepler data.

In the first tutorial in this series, we covered cosmic rays as single-cadence quality events. We saw that when a cosmic ray hits a pixel on the detector, it can momentarily increase that pixel’s flux reading by injecting noise in between readouts. However, there are multiple other consequences of cosmic rays on the detector that occurred over the course of the Kepler and K2 missions.

Sudden Pixel Sensitivity Dropout (SPSD) occurs when a cosmic ray reduces the sensitivity of a group of pixels where it lands. SPSD events are categorized as medium-term and long-term (or permanent) damage. In medium-term events, the effected pixels will gradually return to their pre-SPSD sensitivity. Long-term damage would require annealing to fix, which could not be done on the Kepler telescope, and as such is materially equivalent to permanent damage. Pixels affected by long-term or permanent damage retained their decreased sensitivity throughout the mission. For further reading, see the Kepler Data Characteristics Handbook, Section 5.9.

To observe an SPSD event, let’s download some data first:

Recalling from the first tutorial in this series that cosmic ray events are flagged in the QUALITY column of light curve and TPF metadata, let’s look at the particular quality flag we’re interested in:

Now let’s plot the simple aperture photometry (SAP) flux of the star we downloaded, with a dashed line where we expect to see a SPSD event:

In the above image, we can see that the flux level drops abruptly around 547 BKJD days. This is due to a cosmic ray hitting the optimal aperture containing pixels used for photometry, and causing a sudden decrease in pixel sensitivity.

This effect is corrected by the presearch data conditioning (PDC) pipeline: