How to make a supernova lightcurve?¶

You can use lightkurve to extract a lightcurve of transient phenomena, including supernovae. Supernovae data analysis presents a few unique challenges compared to data analysis of isolated point sources. We can anticipate some of the common limitations of the Kepler pipeline-processed lightcurves, which make no attempt to hone-in on supernovae. For example, the supernova resides in a host galaxy which may itself be time variable due to, e.g., active galactic nuclei (AGN). Common detrending methods, such as “Self Flat Fielding” (SFF) assume that centroid shifts are due entirely to undesired motion of the spacecraft, while transients induce bona-fide astrophysical centroid motion as the postage-stamp photocenter gets weighted towards the increasingly luminous transient’s photocenter.

In this tutorial we will custom-make a custom supernova lightcurve with these simple steps:

We will focus on an unusual class of transient recently observed in K2, the so-called Fast-Evolving Luminous Transients or FELTs. These transients rise and fall within a mere few days, much shorter than conventional supernovae, which can last hundreds of days. The discovery of KSN2015k was recently reported by Rest et al. 2018 and summarized in at least two press releases from STSci and JPL.

The coarse angular resolution of Kepler means that this host galaxy resembles a pixelated blob. We’re showing frame 100 out of 3561 frames– we do not presently know when the supernova went off so it’s hard to say whether there is a supernova in the image or not.

One of the pixels is white, which represents NaN values in the color image. In fact, this pixel within the \(8 \times 8\) square postage stamp image boundary is NaN in all 3561 cadences, indicating that this TPF has an irregular boundary with \(N_{\rm pix} = 63\). Irregular boundaries are a common space-saving strategy for the distant Kepler telescope.

Let’s make a lightcurve summing all of the pixels to see if we can pick out the FELT by-eye. We will pre-process the lightcurve to remove sharp discontinuities in the time series that arise from spurious cosmic rays, not our astrophysical transient of interest.

Voilà! We indeed see what looks like a sharply-rising phenomenon at \(t = 2400-2415\) days, distinct from the smoothly-varying background, which could arise from either instrumental artifacts or host-galaxy.

Let’s identify where the FELT was located within the host galaxy and its K2 postage stamp. We can either visually inspect the lightcurve with interact to look for the position of the explosion, or we can programmatically select cadences to estimate a difference image. I used interact with a fine-tuned screen-stretch to see that the FELT appears near pixel column 830, row 231. Furthermore, it looks like the flux drops off significantly in the first and last columns.

Once we have our aperture and background masks, we can estimate the net flux \(f_{\rm net}\) as: 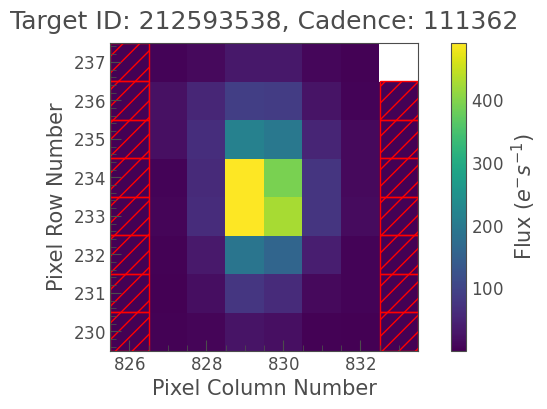 Checks out. Let’s apply the equation above:

Much better! We no longer see the instrumentally-induced background wiggles.